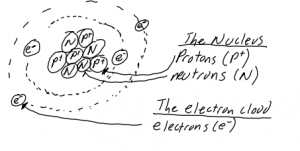 Electrons are in orbitals or shells that form an electron cloud for the atom. The electrons repel each other, however the positively charged protons in the nucleus keep the electrons from escaping.

The nucleus is the densest part of the atom, containing nearly all the mass of the atom. It still takes up a very small volume when compared to the atom proper. The nucleus is comprised of protons and neutrons. The protons are positively charged and they repel each other. The neutrons are uncharged. The force that binds the nucleus together is called the strong force. It acts over very small distances. However, it is much stronger than electromagnetic forces at this scale.