Right triangles have one angle that equals

Isosceles triangles have two sides of the same length and two congruent angles. Here are some examples:

. With this given information,

. When forming perpendicular lines, right angles are formed. Here are some examples:

Acute angles are angles that measure less than

Obtuse angles are angles that measure greater than and less than

Complementary angles are angles that add up to

. Here are some examples

Supplementary angles are angles that add up to

Equations to Solve Angles and Sides of Triangles

Law of Sines and Cosines

The Law of Siens and Law of Cosines can be used on any triang,e regardless of whether it is a right triangle to find a missing angle or side length.

Where a and b are the legs of the triangle, and c is the hypotenuse (the longest side).

(Pythagorean Theorem) for right triangles
Step 2 Substitute so that

Step 4 Add to get

Step 5 Take the square root of both sides to solve for x. x=5

How would this problem change if you were asked to solve for x in the triangle below?
Example: 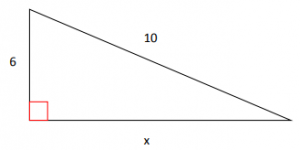 (Pythagorean Theorem) for right triangles
Step 2 Substitute so that

Step 4 Subtract to get

Step 5 Square root both sides to solve for x. x=8

These common types of right triangles have certain side length ratios, which can be useful in solving geometry problems.
Example:
Find x. 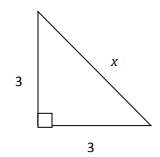 We know that this is a

triangle because the legs are of equal length. The hypotenuse of a

triangle is equal to

times the length of a leg. We can use this fact to calculate

Because this triangle has a right angle and an angle of

, the other angle must be

. (The angles must sum to

. Since the long leg of a

right triangle is equal to

times the short leg, we can calculate x to equal

Area of Triangles and Rectangles

Another basic shape in geometry is the circle. To find the area of a circle we need

, which is the ratio of the circumference of a circle to its diameter. The area of a circle is

multiplied by the radius squared. 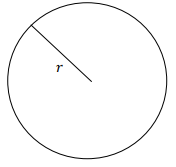 Example:
Find the area of the circle. 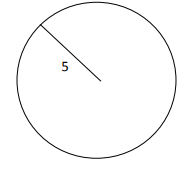 There are lots of four-sided shapes besides rectangles and squares.
Hierarchy of Four-Sided Shapes

Note: A square is both a rectangle and a rhombus. 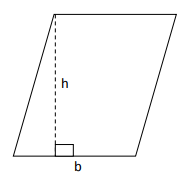 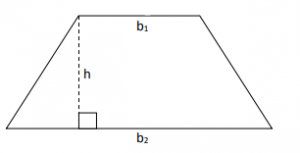 Example: Find the area of the parallelogram. 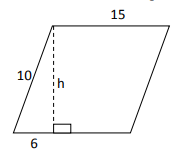 To solve this problem we will need to find the height of the parallelogram. The Pythagorean Theorem can be used with the right triangle formed by the vertical line to find h.

Next, use the formula

to calculate the area.