One of the most common methods of graphing an equation is by using an x-y T-chart. T-charts use a few points to plot and connect a
line. Normally we choose between 3 and 5 x-values to “plug in” and solve for y (the x-values should be both positive and negative and should stay close to 0). A typical set that can be used for most problems are x={-2, -1, 0, 1, 2}.

For example, with x=-2, y=2x-1=2(-2)-1=-5. Follow this same procedure for all of the x-values that you have selected. Plotting and connecting them gives the finished graph:

To graph an inequality you first look to see if it has an “or equal to” sign, =, a less than or equal to sign

When plotting an inequality, plot the line like normal using the appropriate dashed or solid lien and then shade the appropriate side of the line that describes which side of the graph is greater or less than. To determine which part of the line to shade, you choose a test point [(x,y) coordinate] that is not on the line and put the x and y-values into the equation. If the statement this creates is true, you hade towards that point. If the statement this creates is incorrect, you shade away from the point. If possible, choosing the origin is a good choice of test point (remember it cannot fall on the line in order to use it).

Since the inequality is less than or equal to, draw a solid line for y=2x+1 Then, to decide which direction to shade, pick a point (let’s use (0,0)) and see if that point makes the inequality true or false. 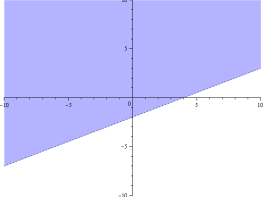 Since, the inequality is greater than, draw a dashed line for

Then, to decide which direction to shade, pick a point (let’s use (0)) and see if that point makes the inequality true or false. 0>

Distribution and the FOIL Method

Multiplying a number across a set of parentheses is the same as multiplying each of the terms inside the parentheses by that number and adding or subtracting them.

FOIL (first-outer-inner-last) is a method used to multiply two binomial expressions. Multiply each pair of terms and add them together.
Example: Expand the following expression (x=3)(x+2)

When factoring trinomials, there are a few different techniques that can be used. The simplest is to try and find a common factor in each of the terms that can be factored out of the expression. Then, you factor the resulting expression like normal.

First, factor an x out of each of the terms:

Next, factor the binomial in the parentheses:

There are a few types of special trinomials that are easy to factor once you know the pattern. Perfect square trinomials can be factored by following these rules:

First, recognize that this is a perfect square trinomial with a=x, 2ab=2x, and b=1
Second, apply the appropriate rul from above the factor.

Another useful factoring technique involves a difference of squares. It follows this pattern:

This means that if you have 2 squares subtracted from each other (whether they are variables, numbers, or a combination of the two doesn’t matter), the expression can be factored.

Recognize that this is a difference of squares because

The general form of at quadratic equation is

The various possibilities of roots are determined by what is called the discriminate. THe discriminate is the expression contained underthe square root symbol:

there are two real roots
if

there is a real repeated root
if

there are two complex roots

To solve problems with cross multiplication, first draw an ‘X’, of where the multiplication is going to take place, connecting the diagonal terms as shown below:

The equation can then be solved by dividing to isolate the variable.

Cross multiplication can still be used even with binomial in the fraction.

The only difference is that we now have to distribute that 6 to both of the terms in the binomial.

After the 3 has been distributed, the problem can be solved as above.

There are there ways to solve systems of linear equations: graphing, substitution, and elimination. We will go through an example of each method.

The first step in the graphing method is to convert the equations to slope-intercept form. This is done by isolating the y in the given equations. 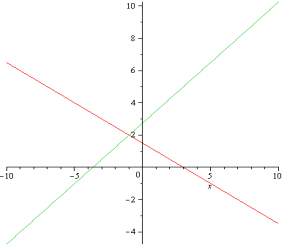 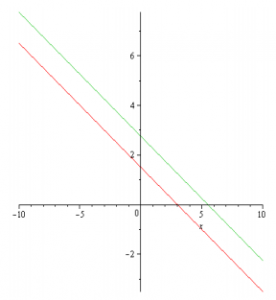 The two lines are parallel. There are no solutions to this system. 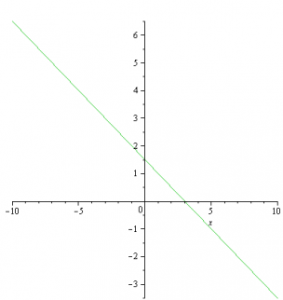 The two lines are exactly the same. Since they are right on top of each other there are an infinite number of solutions to the system.

We are going to use a similar technique in the substitution method. But in this case, we are only going to solve one of the equations.

The last step in the substitution method is plug our newly solved x back into one of the equations and solve for y. It doesn’t matter which equation, the both give the same answer.

The substitution method has now given us that

. Notice that this is exactly the same answer we found in the graphing method.

The final method for solving systems of linear equations is called elimination. In elimination, we either add or subtract the two equations to or from each other. Doing this eliminates either the x or y variable and allows us to solve for the other. We are going to start off with a slightly different set of equations for this example.

Now we have ‘4y’ in both equations. If your equations already have a common coefficient then the first step can be skipped. Now the second equation is subtracted from the first equation. This eliminates the y variable and allows us to solve for x

The last step, as with the substitution method, is to plug the x back into either one of the original equations and solve.

The important thing to remember with percent problems is to pay attention to the wording.

To go from a sentence to algebra you should look for key words. “Is” is the first key word in this problem. This is the same as saying “is equal to” and can be replaced by a “=”. So now we have 18=”what percent” of 30. What percent is the thing you are solving for and can be replaced by a variable (x). “Of” in this case means to multiply. So now we have

for our equation. Solving gives x=0.6 which is a decimal answer and needs to be changed into a percent. To go from a decimal to a percent you multiply

as the final answer. This problem can also be set up as a proportion, knowing that a percent is always going to be out of a total

. In this problem the proportion can be set up as follows:

, solve for x to get

Convert the % to a decimal and you get

which means x=16. Proportions can also one used in this set up: